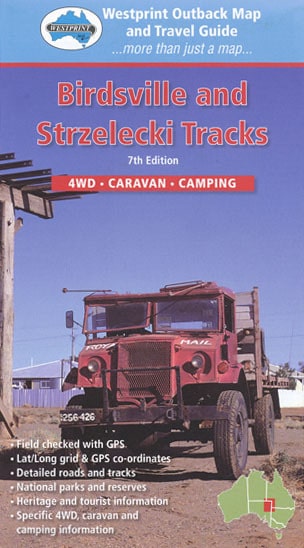 This Westprint Heritage Map includes the entire round trip to or from Birdsville via the Birdsville and Strzelecki Tracks. The reverse side is packed with all sorts of great information.

Coverage of the Birdsville and Strzelecki Tracks includes extensions to Tibooburra via Cameron Corner, Arkaroola in the Gammon Ranges and the QAA Line into the Simpson Desert. A feature of all Westprint maps is the amount of text of historic and tourist interest.

The map contains numbered symbols cross-referenced to detailed information on each numbered site. Intermediate and major distances are clearly shown and there are symbols for fuel locations, rest areas, caravan parks and camp sites. Early explorers routes have been colour-coded. There are also GPS co-ordinates.

The Birdsville Track is known as one of the most notorious stock routes in the world, where cattle died in their thousands and men sometimes died with them. This is a harsh country where trees are few, water is scarce and mistakes are often fatal.

See the Natterannie Sand Dunes, Cooper Creek and Goyder Lagoon, all problem spots for Tom Kruse on the Birdsville mail run. Relive the tragedy of Burke and Wills at Innamincka or follow the path of Harry Redford, immortalised in Robbery Under Arms, as you wind along the Strzelecki Track.

This magnificent area of Outback Australia is closely linked with early history and provides a wide range of landforms, river systems and wildlife for your enjoyment.