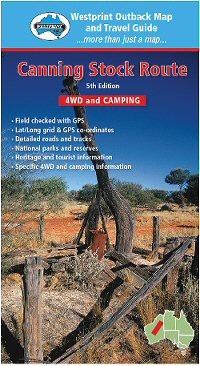 This Canning Stock Route 4WD and Camping – Westprint Map and Travel Guide covers 1800km of remote driving on one of the most isolated tracks on earth.

More than just a map, the comprehensive notes complements the map, making it a valuable guide to one of the most remote regions on Earth.

Alfred Wernam Canning was born at Cambellfield, north of Melbourne, in 1860. He started work in New South Wales as a cadet surveyor and in 1893 joined the Western Australian Department of Lands and Survey.

In 1901 he was given the task of surveying a route for the Rabbit Proof Fence. This survey of about 1,800km from the southern coast to a point south of Broome took four years to complete and was one of the world’s longest continuous surveys at that time.

The Canning Stock Route is one of the most isolated tracks on earth.