Conglomerate Gully Flora and Fauna Reserve is hidden away in the mountains below Mount Macedon near the town of Riddell, at the end of Wheelwrights Road. There is not much room for parking down here, perhaps up to two cars could squeeze in, due to the fact that there are two properties whose driveways extend out from the end of the road. So if you are taking a group of people, you may wish to car pool from Riddell.

Conglomerate Gully Walking Track is a rather short hiking trail and is suitable more for locals in and around the area. At a leisurely pace this trail can be completed within an hour and is suitable for novice hikers. Having said that though, it would be advisable to wear a good pair of hiking shoes, because in some areas the ground is a little rocky and can be rather slippery when wet. It otherwise consists of dirt single track throughout with minor undulations in the terrain.

Conglomerate Gully is named after the fine exposures of conglomerate rocks which can be found along the valley of the creek. These rocks are at least 370 million years old and most probably much older and formed long before the Macedon Ranges.

Conglomerates are sedimentary rocks that are made up of rounded pebbles of other rocks which which have been cemented together in a fine grained sandy matrix.

In the Conglomerate Gully Flora Reserve the rocks are rounded, flattened, whitish pebbles which are cemented together in a reddish sand. The pebbles vary in size from 5cm up to 70cm with pebbles in the range 5-20cm most common.

How did they Form?

The conglomerates at Conglomerate Gully are part of a unit of rocks known as the Kerrie Conglomerate which is exposed in various parts of the Macedon Ranges (see geological map). The conglomerates were deposited in a system of broad, shallow, rapidly flowing streams. The water carried sand and rocks from nearby highlands, tumbling and shaping them into the smooth, rounded pebbles we find in the conglomerate.

The whole region was slowly subsiding, forming a depression which allowed a large thickness of conglomerate to accumulate. In the Black Range area the conglomerates are approximately 900m thick and about 840m thick at Mt Charlie. Substantial amounts of conglomerate have probably been removed by erosion so the original thickness would have been much greater. As the sediment accumulated the grains of sand and pebbles were cemented together under pressure of the overlying rock.

When were they Deposited?

Unfortunately the conglomerates do not contain any fossils, because the right conditions did not occur for these formations, which makes precise age determination difficult. By examining other features of the rocks it is possible to determine an approximate age.

Formation of the Macedon Ranges

After the deposition of the conglomerates of the Macedon Ranges region was affected by spectacular and catastrophic volcanism during the upper Devonian period (approximately 370 million years ago).

The volcanic complex which formed consists of an extremely thick sequence of silica-rich lavas (greater than 2km thick in places). These lavas were deposited in a 64km squared elliptical depression forced by the collapse of a large block of the earths crust. These volcanic rocks are very hard and much more resistant to weathering and erosion than the Ordovician deep marine sediments which they overlie. Hence the volcanics, which once filled a depression, now form the Macedon plateau rising some 400 meters above the surrounding lowlands. Associated with the period of volcanism was the intrusion of granite in the area (see geological map and diagram). To produce the range in this way the region has obviously undergone major erosion.

Approximately 6 million years ago (recent in geological terms) other volcanoes which occurred during the Devonian period but were part of volcanic activity which was widespread over Victoria up until the last few thousand years. Good examples of these volcanic rocks can be seen at Mt Eliza and Camels Hump on Mt Macedon Range. This wave of volcanism affected the drainage and stream patterns of the region. Lava flowed down stream valleys, filling them in. New streams have established along the edge of the lava flows, such as Riddells Creek.

The drainage system at Conglomerate Gully was not affected by this volcanism. This region would have been like an island surrounded by lava as the conglomerates at this time were high points on the landscape. The creek in Conglomerate Gully was probably established pre tertiary and may date back to the early Cretaceous (145 million years ago). 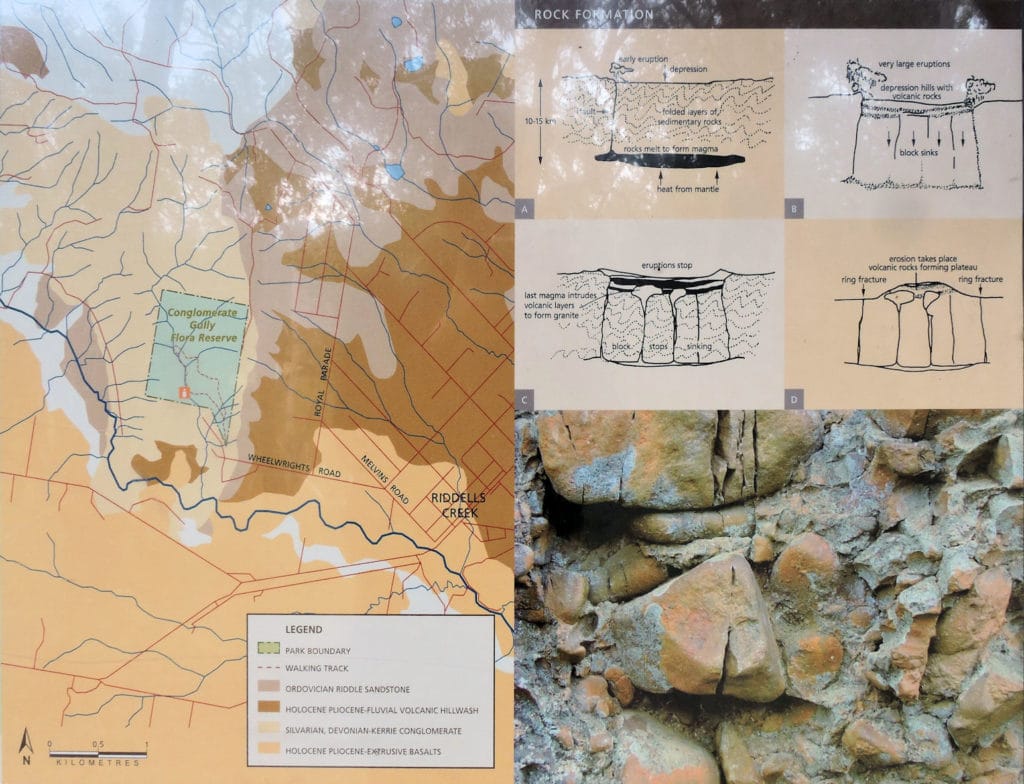 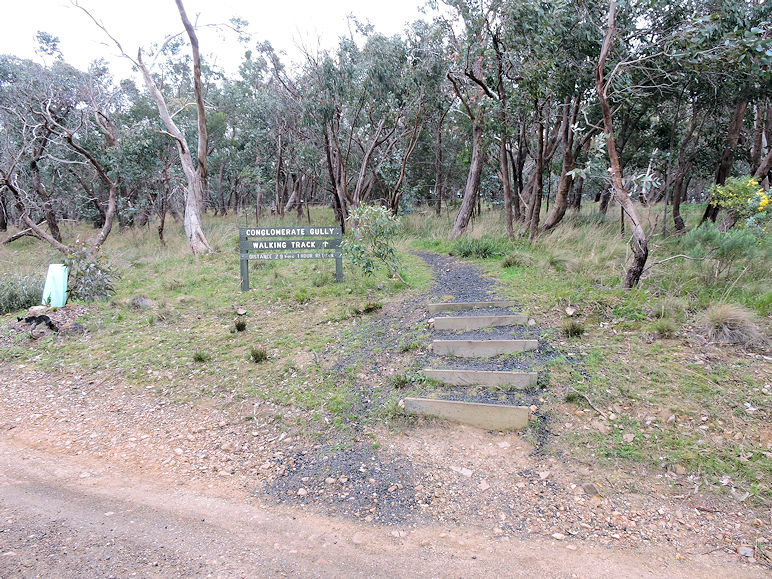 This is the starting point of the trail at the end of Wheelwrights Road. 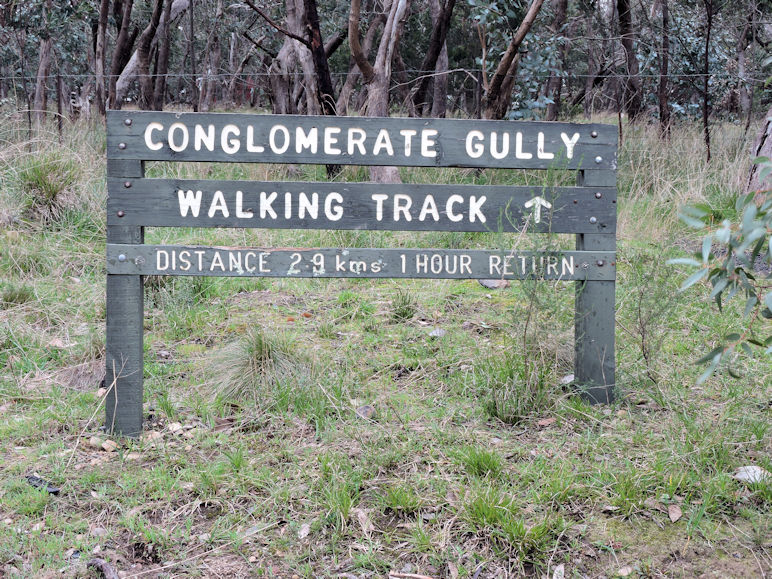 The estimated distance and timing for Conglomerate Gully Walking Track are on par here for a novice hiker. 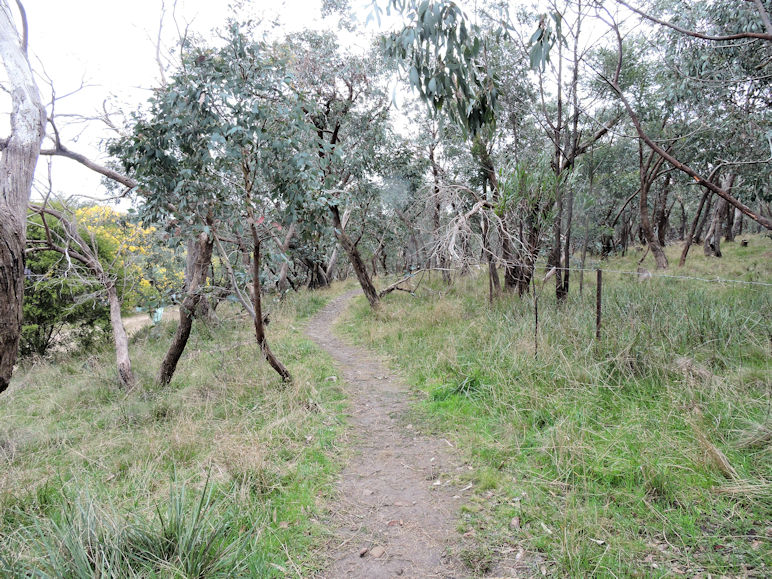 Continue along the trail after the Conglomerate Gully Walking Track sign. 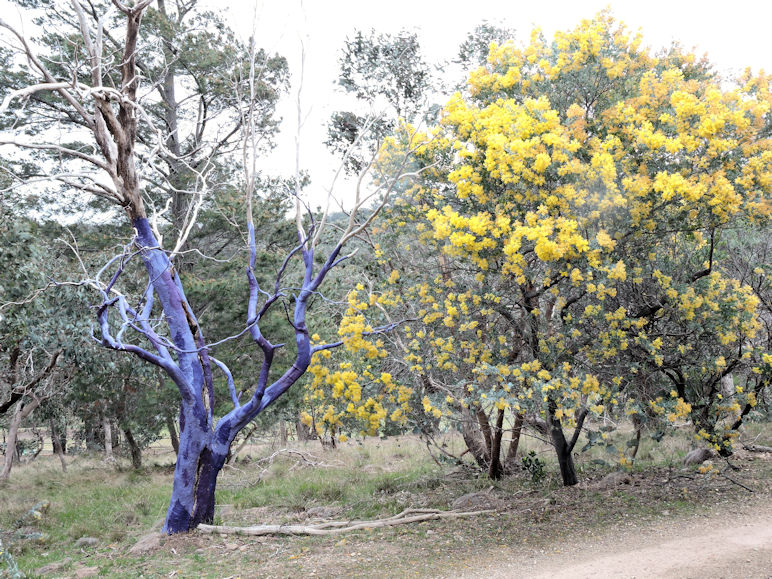 Something that caught my attention were some of the trees in the neighbouring property which had been painted shades of purple! The purple goes very well with the bright yellow from the wattle trees. 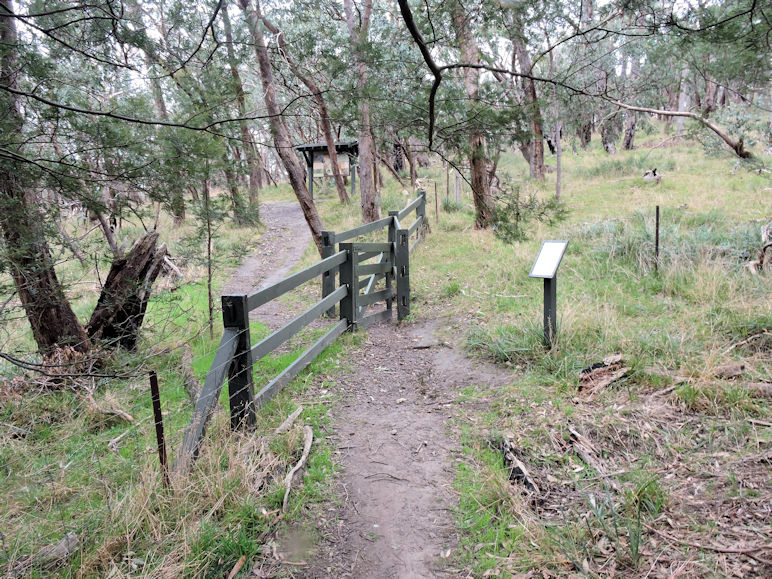 A short way up the trail you’ll come to this gate and a sign that explains the geology of the area. 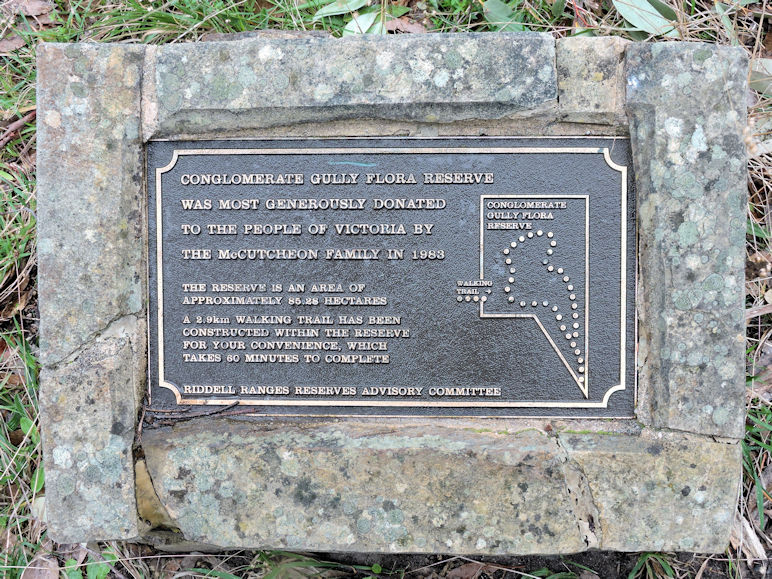 Conglomerate Gully Flora Reserve was most generously donated to the people of Victoria by the McCutcheon Family in 1983. 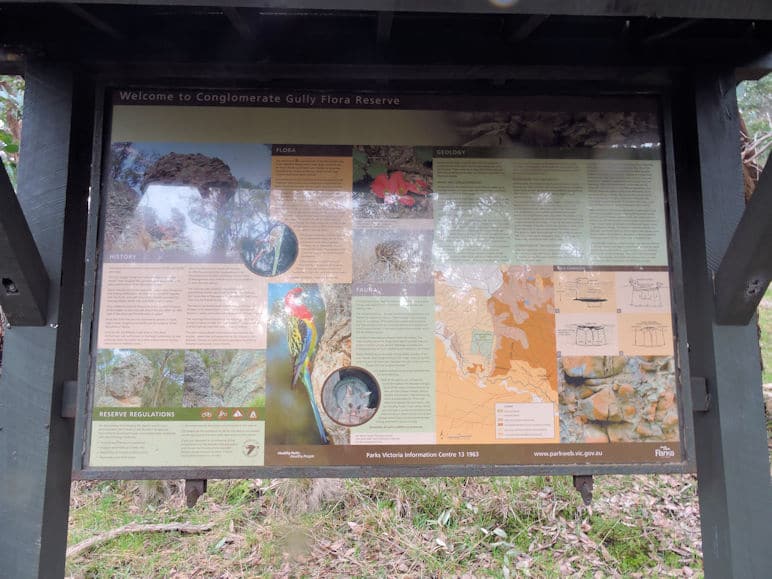 Check out the information board for everything that you could possibly learn about the Conglomerate Gully Flora Reserve. 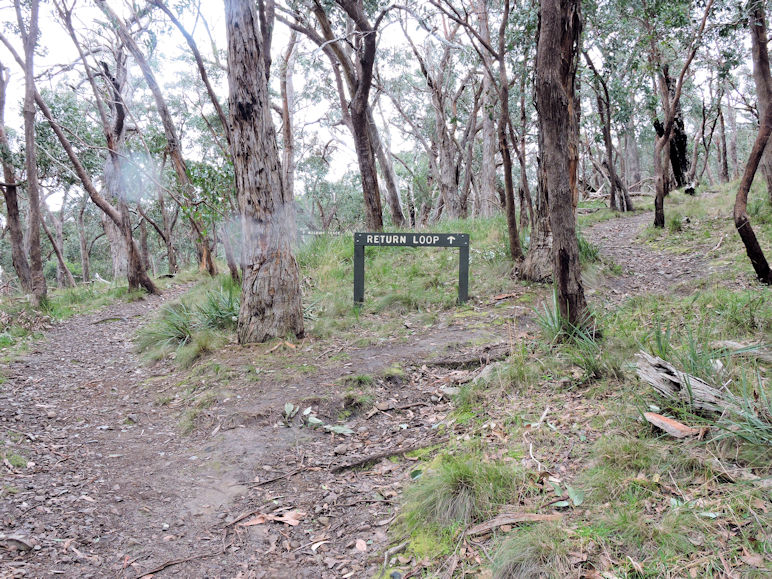 Continue along the trail until you reach a fork in the path, which forms the return loop. In this review we are taking the reverse loop, in an anticlockwise direction, to the right. 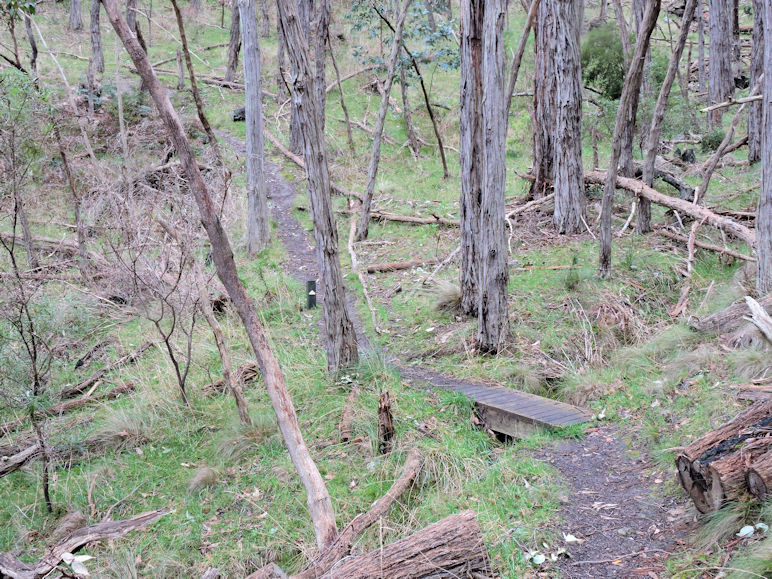 The path is clearly signposted with little white arrows pointing out the way. After this small crossing the trail goes up a slight incline. 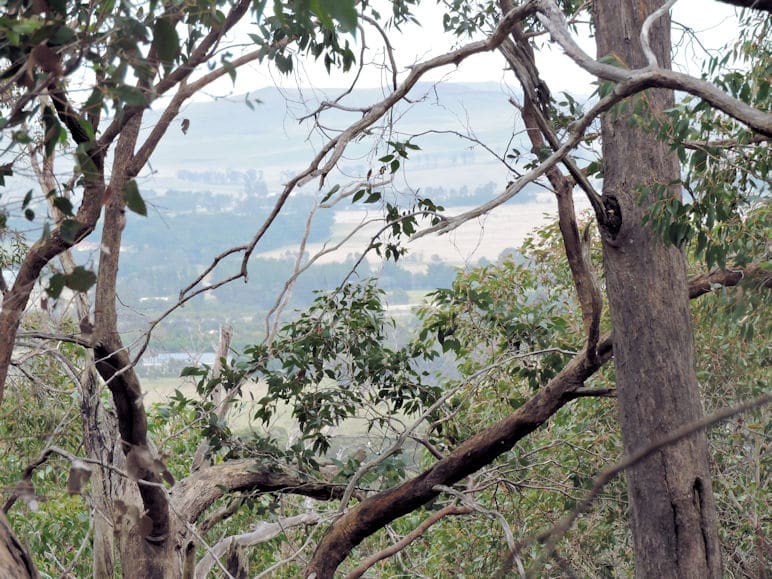 Views to your left are unfortunately quite limited due to tree coverage. 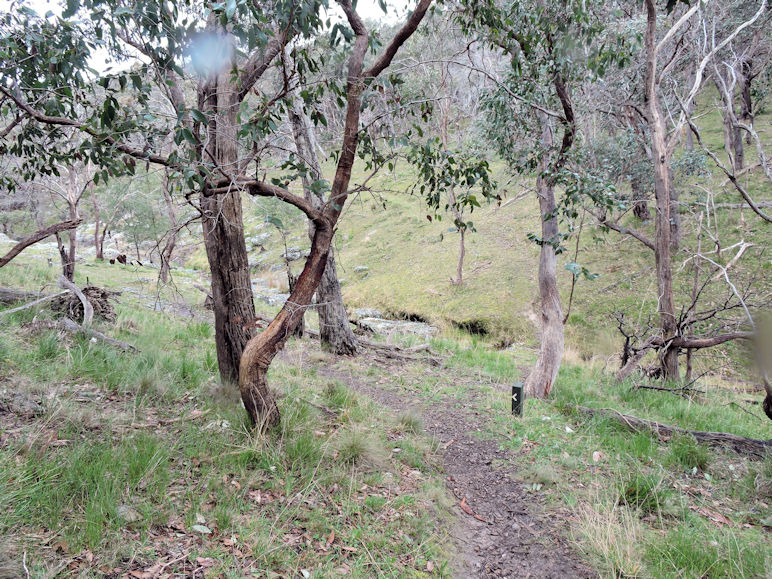 On the way down, be sure to keep left to the marked trail. Once upon a time the trail did cross the river here, however due to corrosion, the path now follows along the left side.

The path becomes a little bit rocky at this point. Follow the faint path across the rocks and take care is it is a little wet. 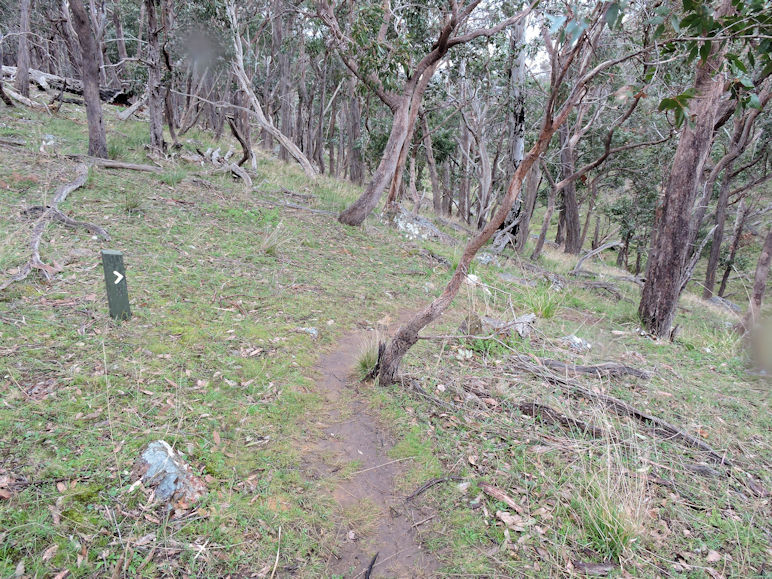 The trail turns right and downhill here heading towards the infamous conglomerate gully. 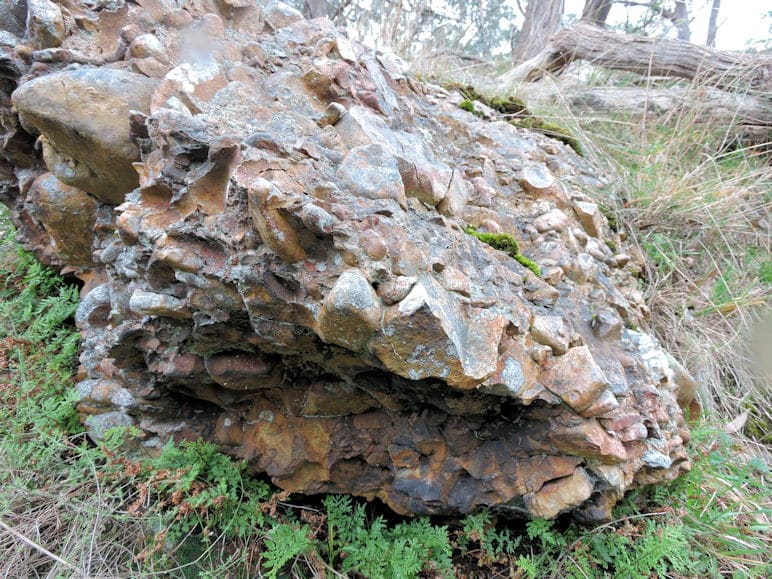 These are the conglomerate rocks that were formed between 370 and 440 million years ago. 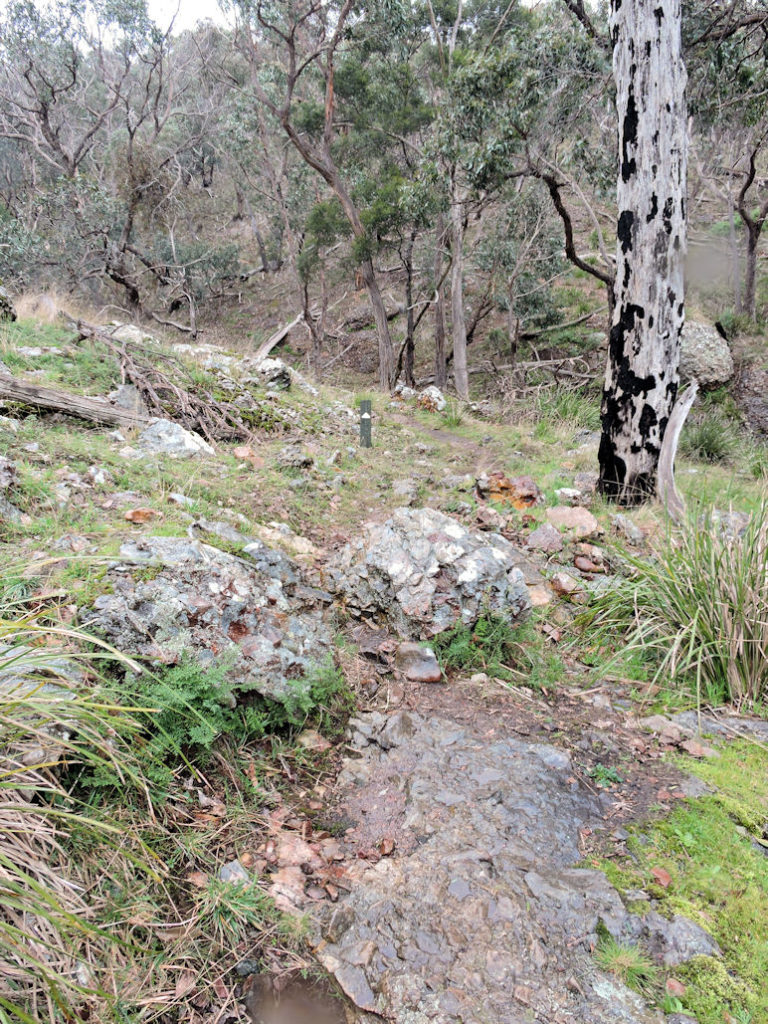 Very slippery when wet through this section. Do take care. 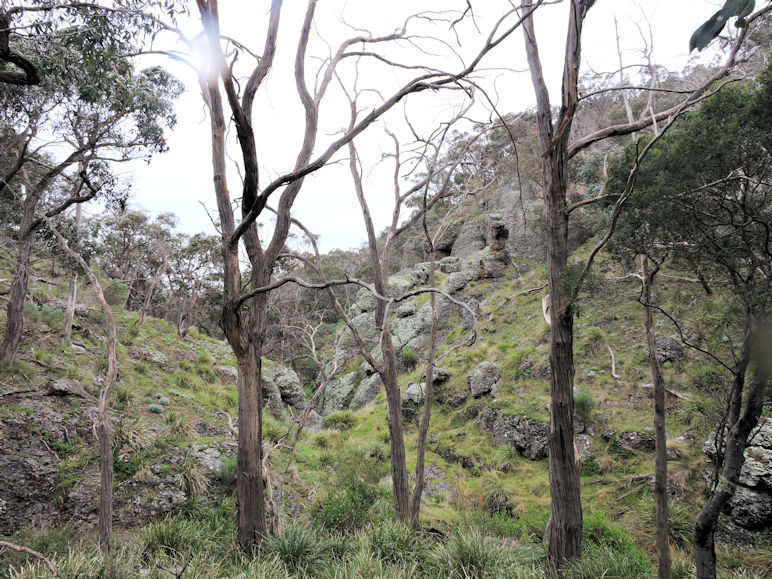 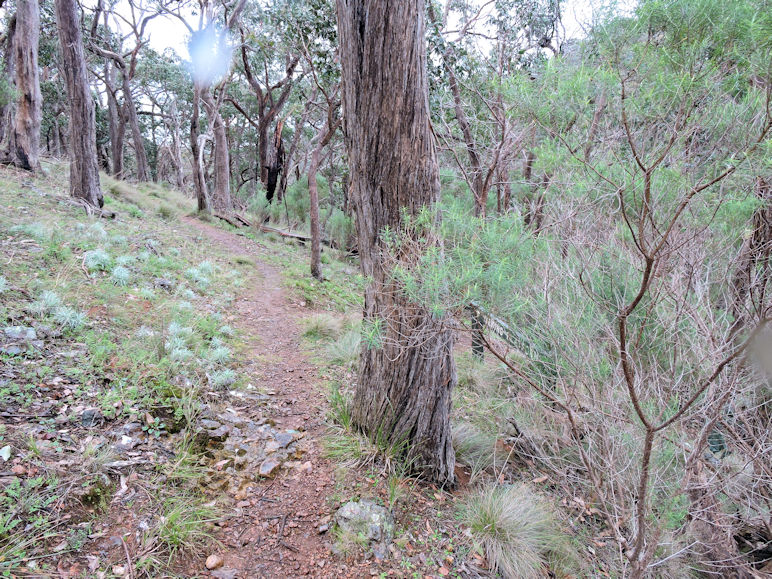 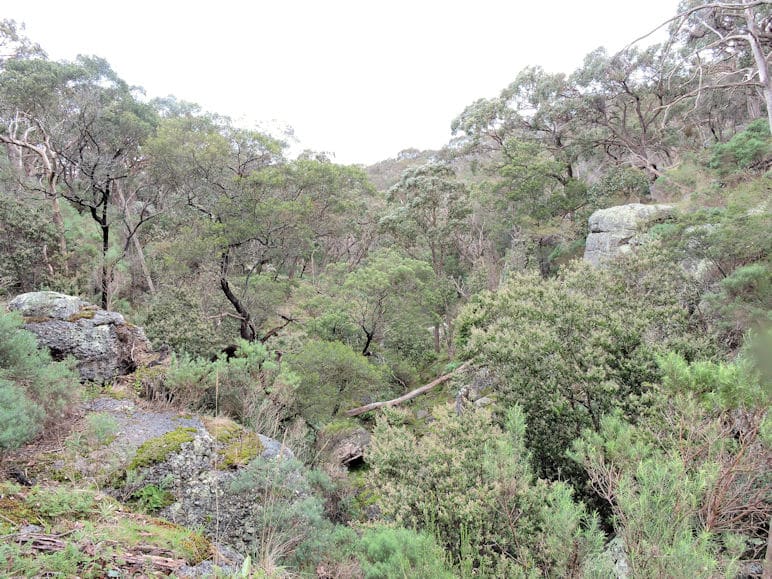 Which is unfortunately rather overgrown and uninteresting to look at. 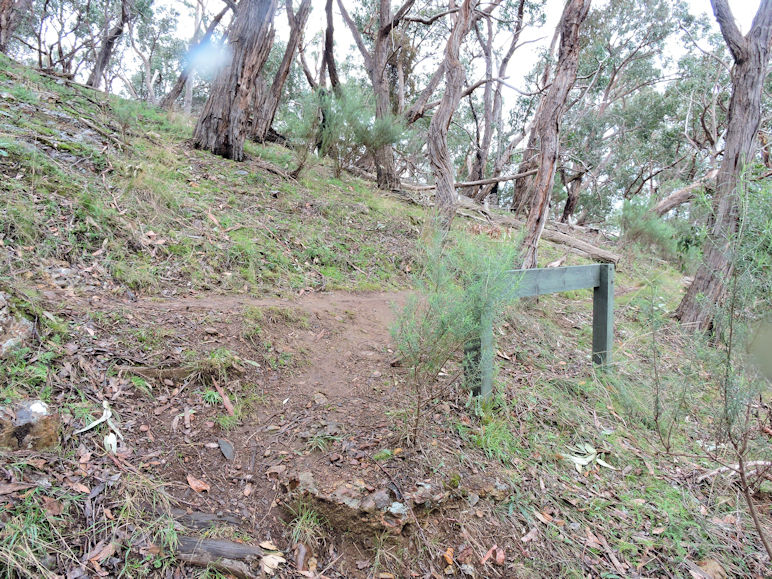 Continue around and exit the viewing area. Take a right turn back onto the regular trail. 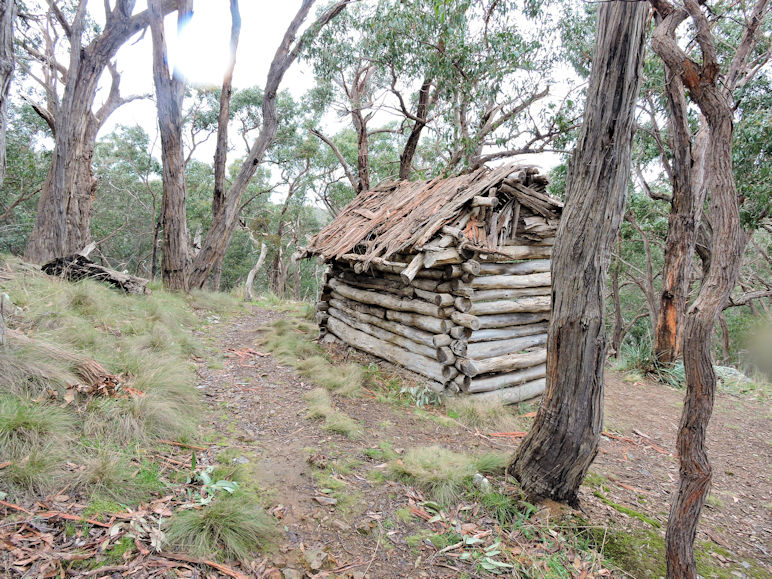 Up ahead is a lovely little shelter which seemingly has no significance to it. It is known by locals as the half-way hut and was due to be pulled down back in 2015 due to safety concern, however it still stands today. It is certainly a nice surprise to see on the trail and pleasant to sit in and take a short breather. 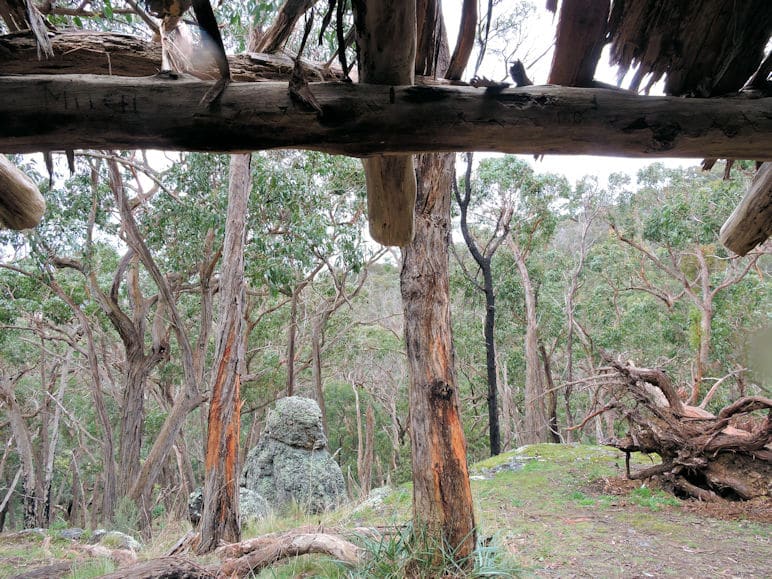 Taking a break and taking in the atmosphere of the surrounding forest. 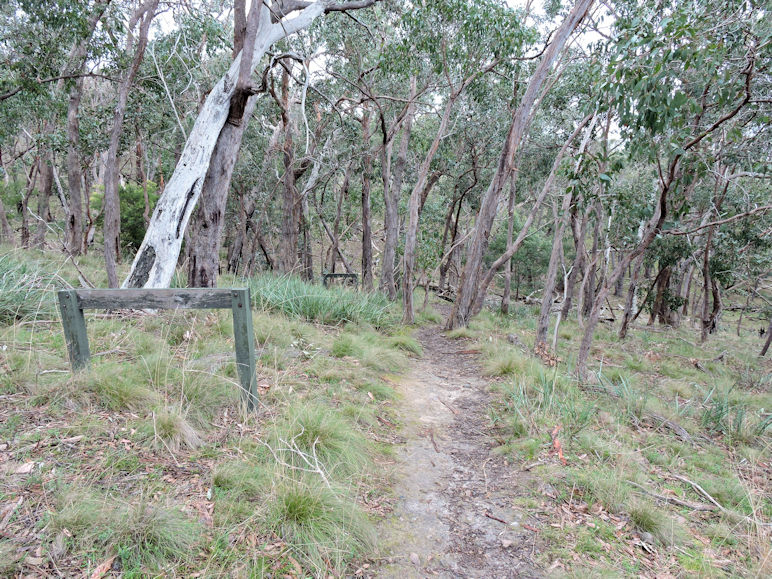 When you are all rested, continue down the trail, where you will reach the end of the loop trail. Keeping right, make your way back through the gate and to your car. 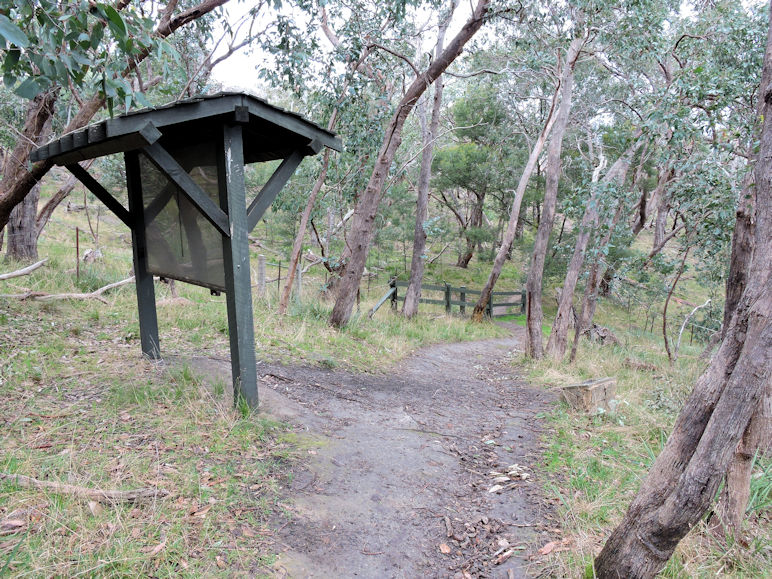 Head back through the gate. 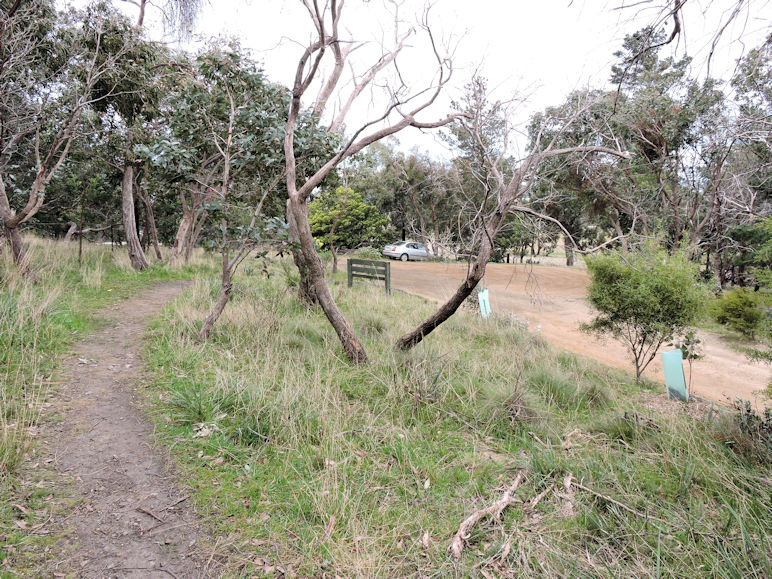 And back to the beginning of the trail.