These 45 metre falls can tumble with a powerful roar or a gentle trickle. It depends on the waters of Running Creek flowing from the top of the Great Dividing Range, which is only a short distance away at the Kinglake-Whittlesea Road. The waterfall usually flows all year round but is particularly impressive after heavy rains. Running Creek flows on to become part of Arthur’s Creek, then Diamond Creek, before flowing into the Yarra River.

Kinglake National Park is an area that has been steeped in myth, legend and lore for thousands of years. From ancient Aboriginal tales from the Dreamtime to the more recent devastation of the Black Saturday bushfires, this is a place where nature has shown its power and history has been made.

Masons Falls Walk is a 2km track which will take about 45 minutes to complete. The walking trail offers a beautiful view of Masons Falls.

Once providing food, shelter and a rich spiritual world, the area now known as Kinglake National Park occupies the traditional lands of the Wurundjeri people to the south and the Taungurung people to the north.

The Kinglake Ridge (a feature that roughly follows the line of the Whittlesea-Kinglake and Healsville-Kinglake Roads) formed a natural boundary between these two indigenous groups.

For many thousands of years, the Wurundjeri and Taungurung people enjoyed the abundance of seasonally available flora and fauna, as well as using the area for important cultural events and rituals.

Many fascinating Aboriginal sites and relics were uncovered by the 2009 bushfire, including scatters (tool-makers) and hand tools. These sites have now been surveyed and recorded so that they can add to our understanding of the region’s unique history and remain protected in the future.

The Lust for Gold, the Call of “Timber!”

Gold was discovered in 1861 on nearby Mount Slide to the east that became known as Mountain Rush. Once news spread, European settlers raced to Kinglake with hopes of striking it rich.

Following the gold rush, this area became highly prized for its abundance of high quality timber. Sawmills such as Carmen’s Mill were established in the forest in the early 1900’s. A network of timber tramways transported logs from the mills to hubs such as Whittlesea to supply the timber needs of an ever-expanding Melbourne.

The national park was officially gazetted in 1928 when 5,590 hectares were reserved.

In the devastating Black Saturday bushfires of 7 February 2009, over 287,000 hectares of public and private land was burnt beyond recognition.

Kinglake National Park was one of the most severely affected parks in Victoria with over 96 per cent of the park burnt. Along with many houses in the area, the park office was destroyed and animal numbers were vastly reduced.

Despite initial fears that most of the park’s animal population had been lost, animals were sighted as early as a year after the fires – a testament to the incredible resilience of Australia’s native plants and animals.

As well as koalas, goannas, wallabies and bats, our beloved Superb Lyrebird is also still at home in the park.

Following the fires, the bush regenerated with fresh new eucalyptus, a bright green bloom of grass trees and ferns and as the seasons passed, wattles, bush peas, cassinias, heath, tussock grass and orchids also began to bloom once more.

A Safe Home for Plants and Animals

Kinglake National Park provides important habitat protection for a wide diversity of native plants and animals, including a range of rare and endangered species that were once common in the increasingly urbanised Yarra Valley.

Hundreds of Species, a Thousand Things to See

Even though you may not see many native animals, as they are active at night, you can still see their presence by the scratchings and the scats on the ground or the claw marks on trees. During the day you may see snakes and lizards as well as some of the many species of birds such as the Crimson Rosella, Pied Currawong or Yellow Robin. As you walk, look up for Koalas lazing in the gum trees and listen out for crashing through the bush – it may be a Black Wallaby making a hasty retreat.

The wetter aspects and gullies in the park are dominated by Mountain Grey Gum, Messmate and Mountain Ash – the world’s tallest flowering plant.

The understorey is a multi-coloured mixture of wattles, bush peas, cassinias, heath, tussock grass and grass trees. Orchids, lilies, daisies, correas, and grevilleas are prolific throughout the park with brilliant flashes of colour on show from August to November.

The Supurb Lyrebird – the unrivalled king of mimicry

Superb Lyrebirds are known for their amazing ability to imitate sounds they hear in the environment.

Their complexly muscled syrinx – or vocal organ – gives them an extraordinary vocal repertoire and talent for mimicry. Not only can the Superb Lyrebird reproduce the songs of other birds (or the chatter of whole flocks), they can also mimic other animals, human voices, machinery sounds, explosions and musical instruments.

Superb Lyrebirds enjoy a feast of insects, spiders, worms and seeds. They forage for food by scratching with their feet through fallen leaves.

In dangerous situations – like the Black Saturday Bushfires – they have been known to take refuge in wombat burrows or alongside firefighters in mine shafts.

However, Lyrebirds are generally shy birds and hearing their calls is often the only way of identifying them.

Inviting Partners to the Dance

In winter, male lyrebirds attract potential mates by building and maintaining an open mound in dense bush. They stand on top of the mound and sing and dance to attract the attention of a female mate.

Females build an untidy nest, usually low to the ground in a damp gully, where they lay a single egg. 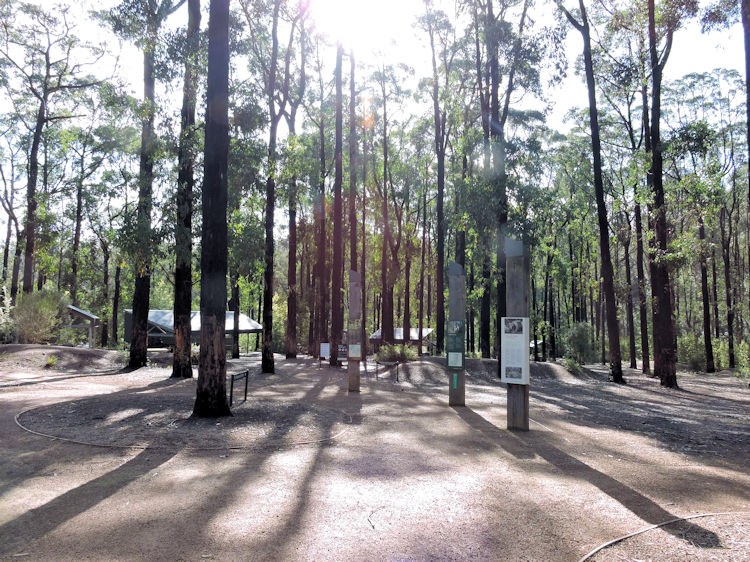 Masons Falls Picnic Area, the start of the walk. 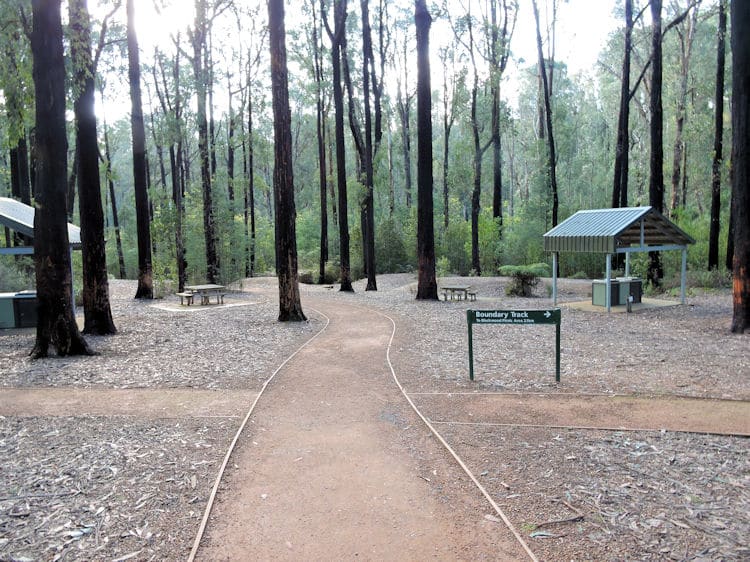 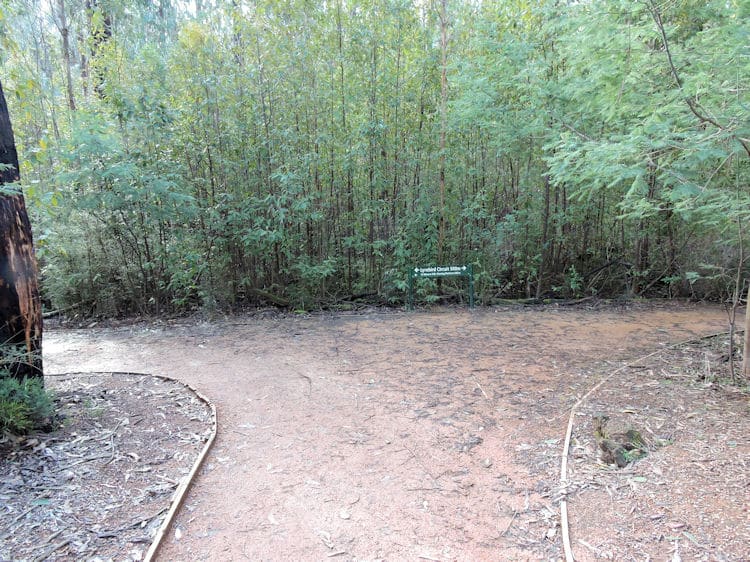 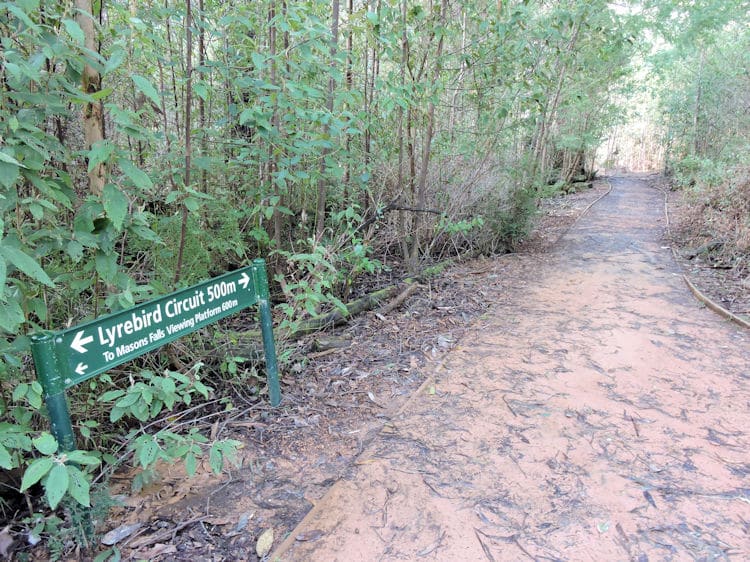 We are adding the 500m Lyrebird Circuit to the walk to extend it to a nice 2km walk. 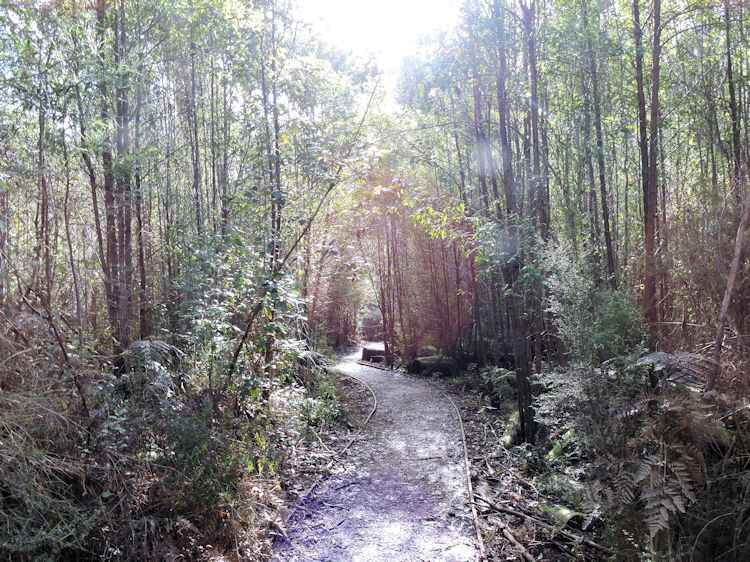 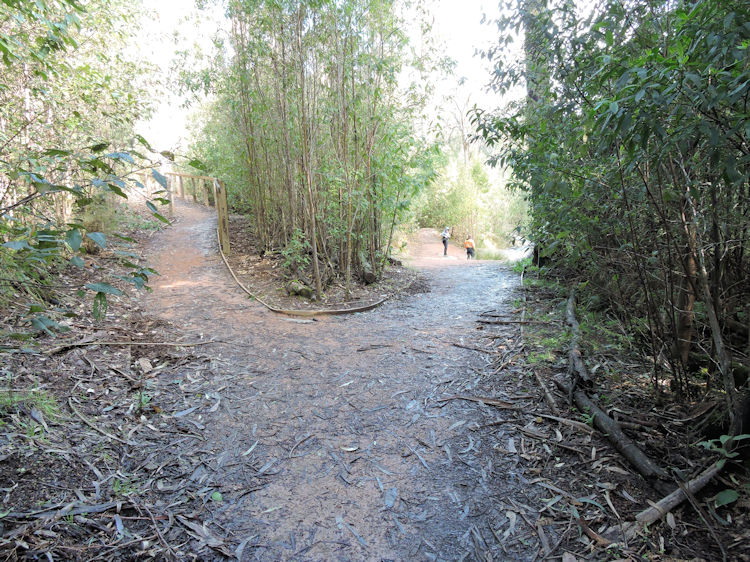 Pop in to the RIGHT, to take a look at the top of the waterfall area, then come back and head LEFT to proceed to the Masons Falls viewing platform. 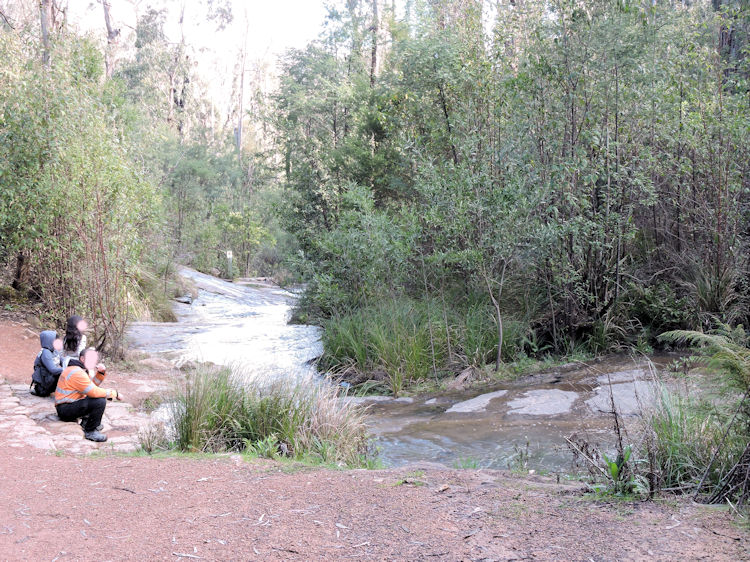 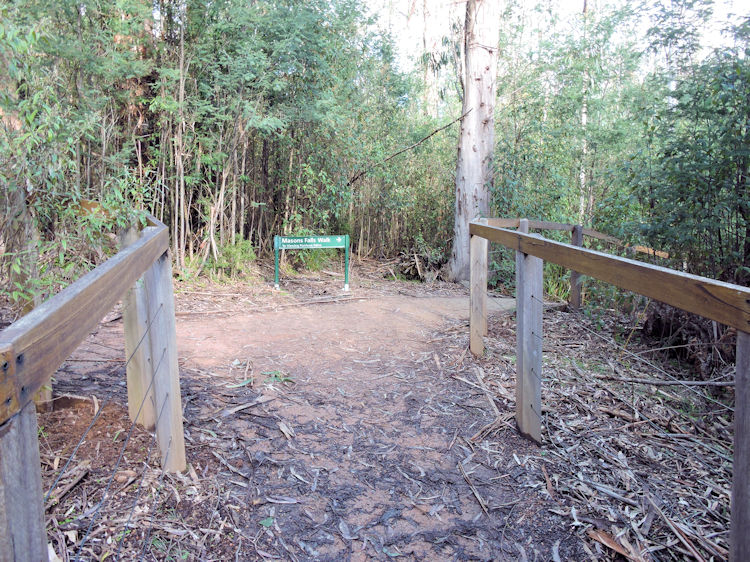 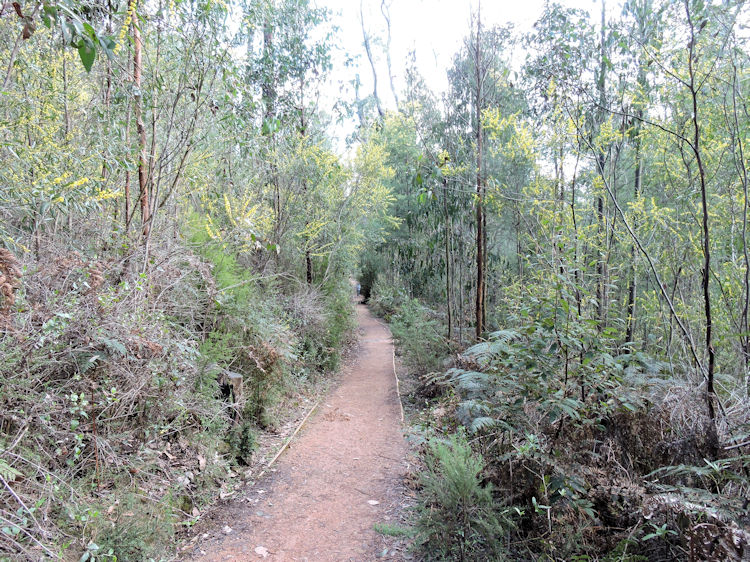 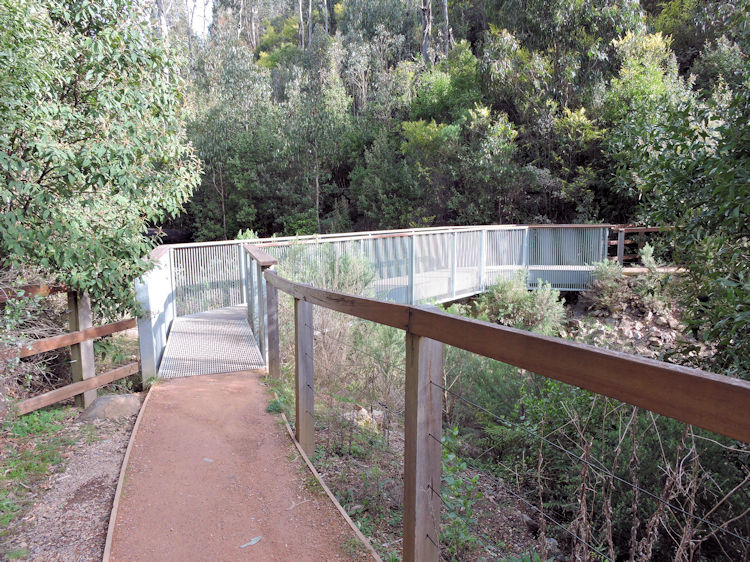 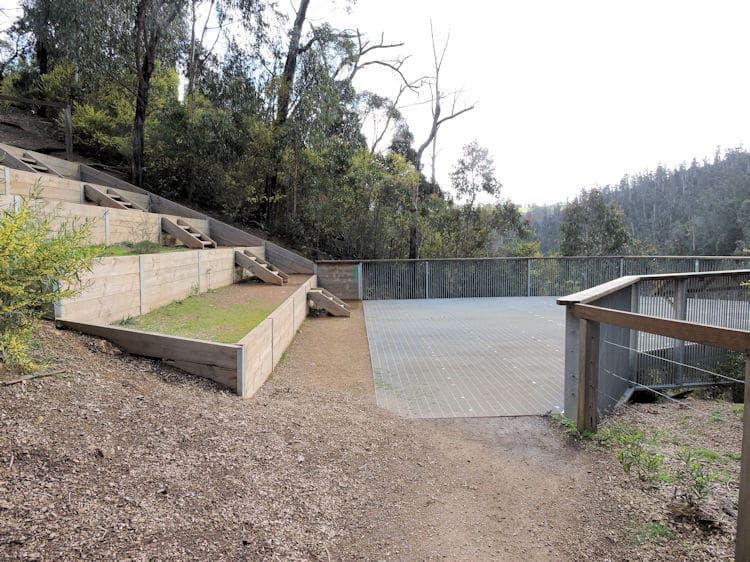 Welcome to the Masons Falls viewing platform. Sit down, enjoy the view, have a bite to eat, then head back to the picnic area. 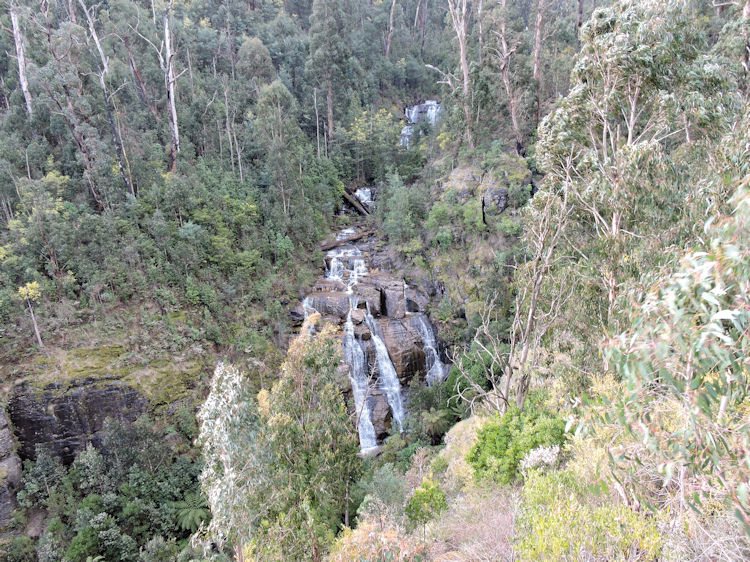 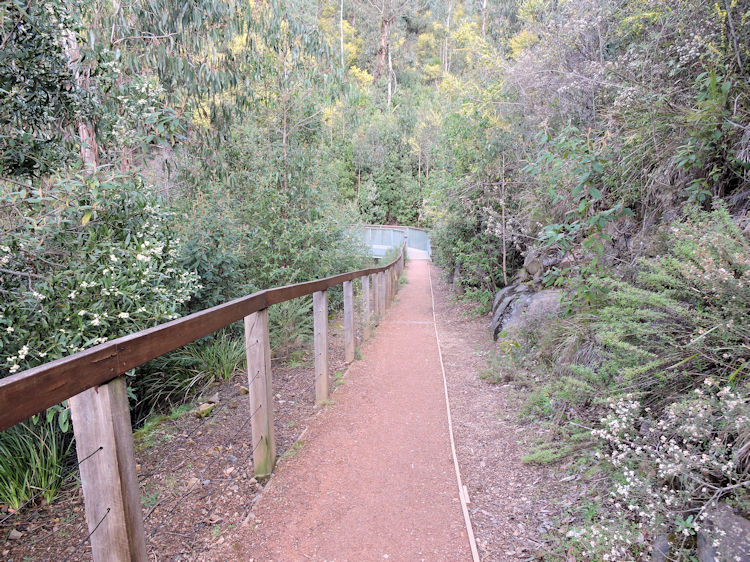 Head back the way you came. 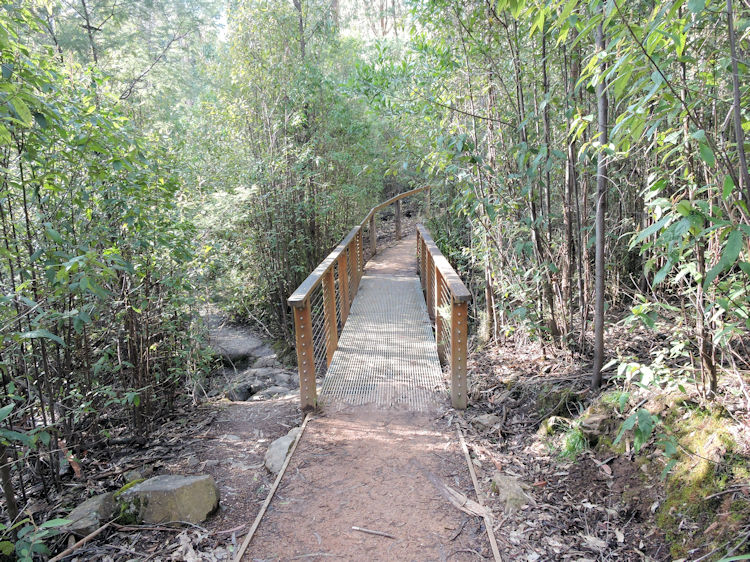 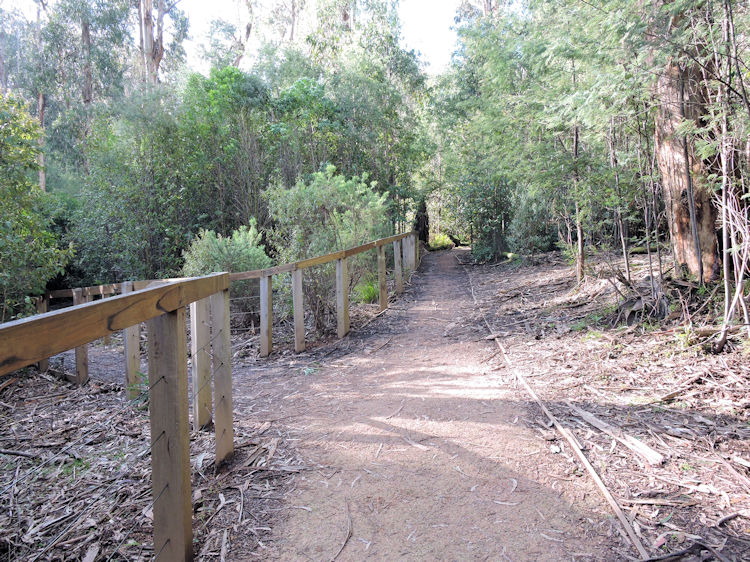 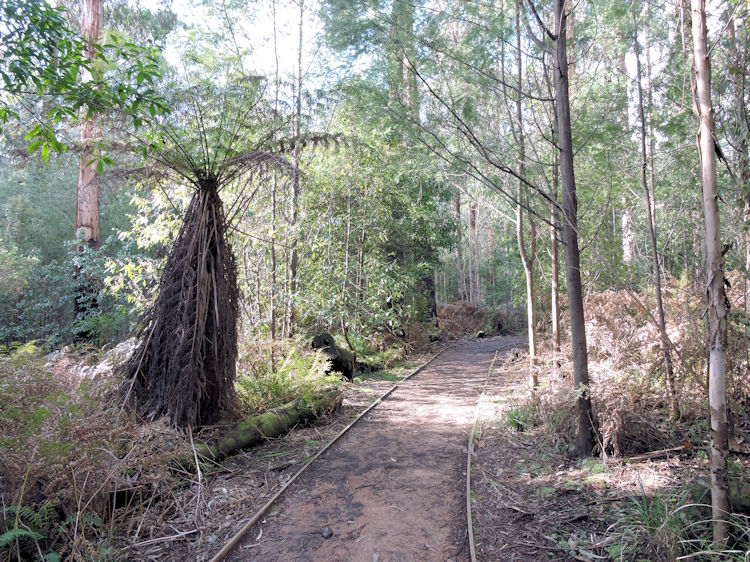 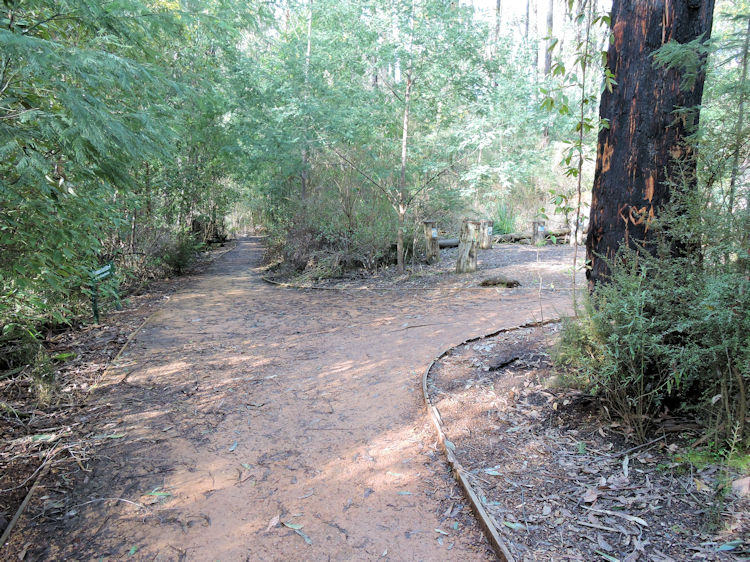 Turn RIGHT to head back to the carpark. 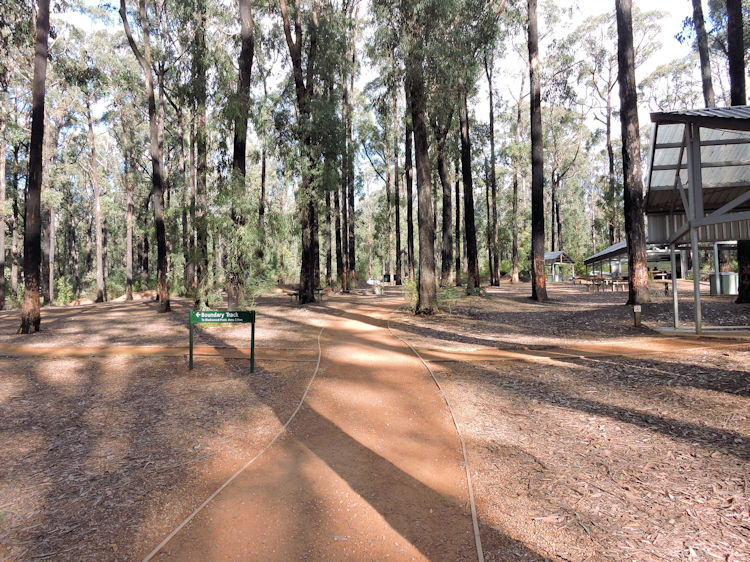 Continue STRAIGHT ahead to the carpark. 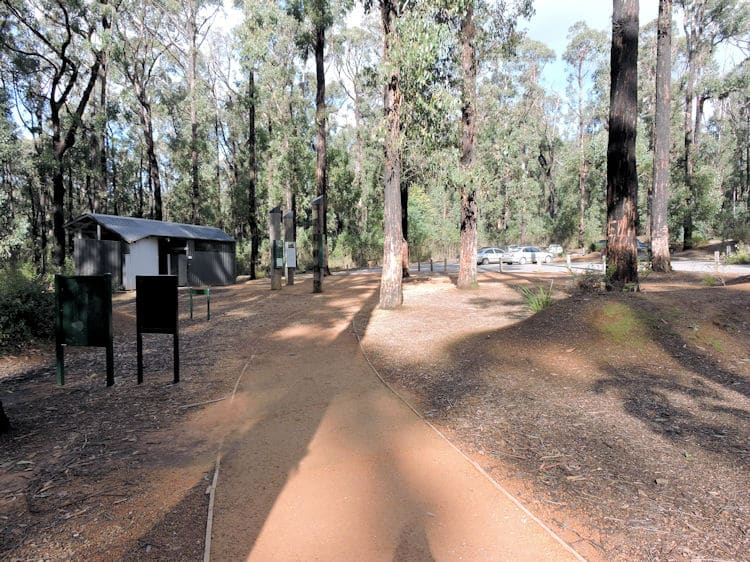 Welcome back. See trail end options for other walks that you can do in the area.